It consists not of the usual 180-sheet Tom Rielly format, but 80 double-sized A3 display sheets, in which Norman explores some of the benefits of the extra space. In particular, he will try to show how the wider page allows the addition of context and content, especially in this case in relation to the inclusion of historic letters.

Norman has been a member of Perth Philatelic Society since 1981 and joined the Scottish Postal History Society the following year. He is a past winner of the Robson Lowe Silver Salver for philatelic literature and has been a regular writer for Stamp Magazine since 2008.

A journalist and historian, he has worked for the Dundee media giants D C Thomson since the 1970s, including 15 years as Leader Page writer of The Courier when it was Britain’s top-selling provincial daily newspaper. As a historian he has written around 20 books and co-curated major exhibitions in London, Edinburgh and Dundee.

The first 16 double-sheet section is titled The Skeleton Camp Postmarks of Scotland. This display investigates the rare group of postal handstamps issued to Volunteer and Territorial army camps in Scotland either side of 1900. Distinctive ‘skeleton’ datestamps, made up with the name of the camp in moveable type, were issued to around a dozen camps. The Post Offices were open for short periods – sometimes only for a few days – resulting in an extremely low survival rate for several of these handstamps. As a group, they are among the least known and least understood Scottish postmarks.

The second 32 double-sheet section is titled Peace in Our Time and shows remarkable postal eye-witness accounts from some of the world’s great conflicts – the Napoleonic Wars, the First China War, the Indian Mutiny, the Afghan and Burma Wars, the Boer War, First and Second World Wars, Korean War and others.

The theme, however, is peace, with many of the postal items relating to historic treaties, negotiations and settlements, the A3 format allowing the wider display of important accounts of these great conflicts of the past.

The third 28 double-sheet section is titled The Lanark Aviation Meeting – August 6th-13th 1910 and uses postcards, letters and original ephemera to illustrate and describe Scotland’s first-ever aviation meeting, while attempting to answer important questions over one of the most elusive of Britain’s 20th century cancellations – the ‘Lanark Grand-Stand’ postmark used during the week of flying. The A3 format here allows the display of an important archive of Lanark Aviation Week documents from the Scottish Aeronautical Society.

It is a huge honour to present the Tom Rielly Display as my home society proudly hosts the 91st Congress of The Association of Scottish Philatelic Societies.

Examples of the Stobs Camp skeleton postmark are extremely rare, as mail from the camp was taken to Hawick for sorting. It was barely known for many years and unrecorded, or reported unseen, by several noted postal historians, including J. J. Waterman, David Jeffries, James Mackay and R. A. Kingston. Three examples are included in the display. 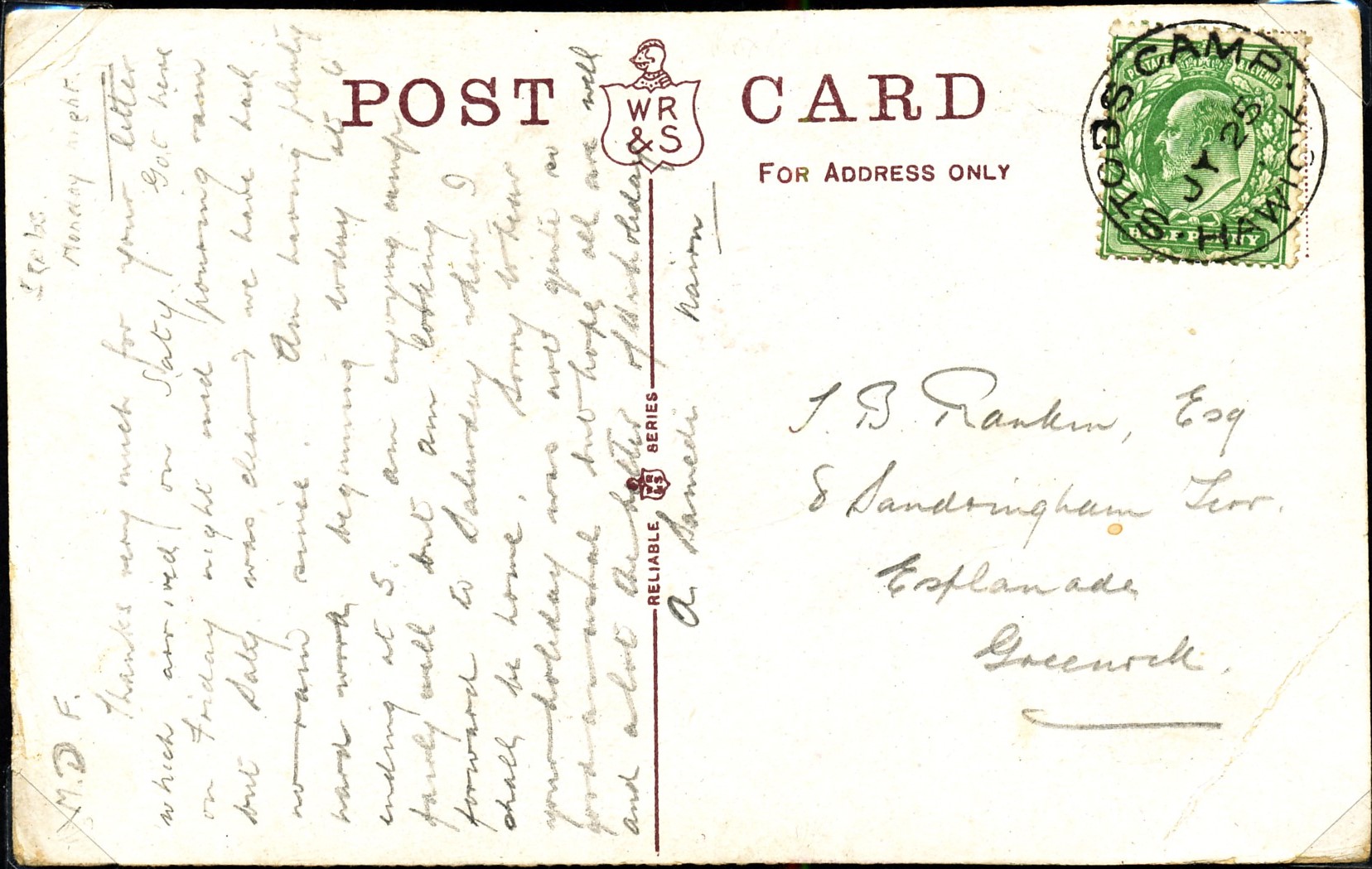 From an exceptional exhibit of historic letters, this Armistice Day item was posted from Edinburgh on November 11, 1918 with the message,“The town is wild with excitement…flags everywhere & everyone carrying one…What a mercy this awful war is over at last…Princes St is lovely today, crowded – with people, troops marching, bands playing, cheering…”

“Only 30” examples of the 1910 ‘Lanark Grand-Stand’ cancellation are said to have survived. It was, however, intended solely for use during the Scottish Aviation Meeting of 1910. It is uniquely associated with that event and should be regarded as an important precursor of the British airmail story.

Below is a picture of Norman receiving his Tom Rielly medal from President Rev. J. Colin Caskie. 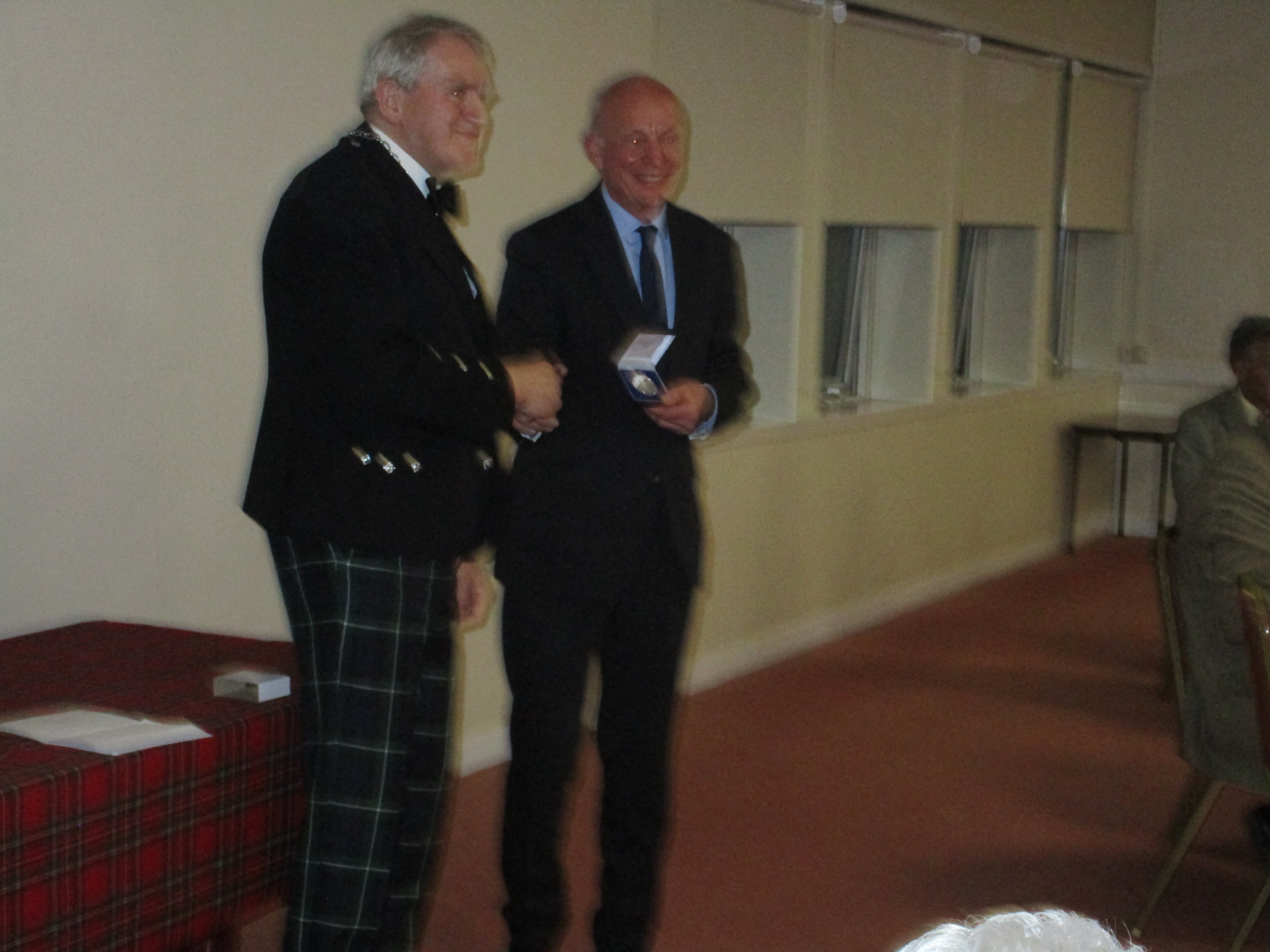 Copyright (c) 2016-2022 Association of Scottish Philatelic Societies.
The documents on this website are for informational and non-commercial or personal use only.