'It is a great honour to be asked to give this display. Fortunately, I had the privilege of meeting Tom Rielly and had the pleasure of viewing his various displays through either Alba Stamp Group meetings or indeed when Tom visited the Lanarkshire PS to show Aden or St Kilda. Although he got a warning regarding his heart problems, Tom did change his lifestyle becoming much fitter but sadly died from further heart problems. He was a stalwart in the Scottish PS and was a past ASPS President on two occasions.

The Display consists of sheets selected from my collection of Scottish postal history and Norway. The Norwegian collection began when my sister married a Norwegian and moved across to Norway sending FDCs every few months. I have selected frames to give a sample of what I now find interesting and hopefully some of it will be of interest to you.

Carluke Postal History (1 frame). Sadly, Professor Ian Stevenson was killed 6 weeks ago and although I had only met him once or twice at Scottish Postal History meetings, he was one of the founder members of the Lanarkshire PS. What I remember of Ian’s displays is the Foreign Thurn and Taxis material that our ASPS President knows a fair bit about, but also Ian being a Shotts-born lad collected some Lanarkshire postal history and I recollect him showing some Carluke material including Mulreadies which made me drool a little!!! Carluke was a tiny mining village that has recently outgrown it’s neighbouring town of Lanark. What I have decided to show is an example of mail from the local GP, Dr Daniel Rankin, who wrote a history of Carluke much later in his life. Sadly, he died almost penniless (only £5), but the towns people gave him a tombstone. The other item from this display is the elusive A4 obliterator – the only office in Scotland with a 4-4-3 line format. James Mackay did wonder whether this was just the A1 stamp (with 4-4-4 line format) poorly struck.

Royal Highland Agricultural Society (1 frame). How many have ever visited the Highland Show? Well, the opening of the Forth Road Bridge meant that I was able to travel more easily from Perth and attended a number of shows since then. I have selected the 1931 show as it was the 100th and instead of the usual skeleton cancellation, the Edinburgh/19 double ring datestamp was used. Instead of time slugs, “H” and “S” were substituted to represent Highland Show, How many remember the Kirkcudbright Congress in 2012 when Alex Ferguson (not of Manchester Utd) but the then Presiding Officer of the Scottish Parliament was guest speaker – well he was also then the current RHAS President. My other item is a label from the 1939 show.

Norway (4 frames). The first of the Norwegian frames is the explorer and later statesman, Fridtjof Nansen and his Fram expedition in 1893-6. Nansen planned to set the Fram into the ice and let it drift over the North Pole and come out the other side. However, he realised that the drift was going to miss the North Pole so he set off with another member of the crew and headed for the North Pole. He eventually became aware that reaching the North Pole was impossible, so they turned back and headed for Franz Josef Land where they had to overwinter before meeting the English explorer, Jackson seen in this postcard. The booklet for the personalized stamp from Fredrikstad Post Office shows a nice map of this expedition.

The second Norwegian frame is also postcard based with a selection of the various Fram/Maud series of postcards sold to help finance Amundsen attempt to repeat Nansen’s drift over the North Pole. These cards were sold from 1913 but the Great War (WWI) delayed the sailing and cards were eventually delivered as late as 1926. By 1918, Amundsen had changed his ship from the Fram to the Maud and a type II card was issued with only one language rather than 4 languages.

Hurtigruten in the 21st century makes up the next 2 frames. The Hurtigruten express coaster service leaves Bergen every day and takes 11 days to reach Kirkenes next to Russia and return to Bergen. Therefore 11 vessels are required for the season. However, Hurtigruten has 3 other ships, some like the Fram used purely for expeditions to Greenland, Svalbard or the Antarctic. Each ship has it’s own handstamps and postally valid personalised stamps. The latest addition to the fleet was MS Spitsbergen whilst the latest pictorial handstamps issued are for the ships’ visits to Lofoten.

British Antarctic Territory Huts (1 frame). This frame was a result of my first expedition voyage on the Fram in the Antarctic. When I was there I vowed that I wouldn’t start collecting the British Antarctic stamps, but on return home I started to pick up various items that were related to what I to had experienced there. On Stonington Island (Base E), I photographed the British base and the BAT then produced a stamp in 2015 using the same view. Also within the Antarctic circle, the Marguerite Bay (Base Y) material was snapped up by me after slumming it in a tent overnight (can’t remember it ever being completely dark).

Norwegian Air Mail (2 frames). Norway’s first air mail used a seaplane from Oslo down to Kristiansand S. The first regular flight abroad was the air mail service between Stettin in Germany via Copenhagen and Gothenburg. During the 1930s there were numerous new airmail routes including one in 1935 from Bergen to Trondheim and thence on to Tromso. In 1998 three stamps were issued for Oslo’s new airport at Gardermoen – the lowest value stamp shows aviation history – with three different planes a DC-3, Junker JU-52 and a Jumbo-jet. More recently Lufthansa sponsored a first flight cover from Bergen to Frankfurt using a personalised stamp showing the Lufthansa plane that was utilized. Going back to November 1939, there was a first flight from Oslo to Stavanger and then on to Perth.

Perthshire Penny Post (1 frame). This last frame shows the various Penny Posts within Perthshire. The Perth Penny Post had outlying offices in Bankfoot (reckoned to be 1), Methven (thought to be 2) and Scone (probably 3). In contrast, Jim Grant’s recent book declares the boxed 1 mark as Scone and the boxed 3 as Bankfoot. A bit of a disagreement. In gathering the material for this display, I noticed I had some apparent duplications of the examples with 1 and 2 boxed number markings. It seems to me that there were two different boxed 1s and in addition two different boxed 2s – so it is possible that Jim’s interpretation and the alternative may both be correct. The more recent examples being issued to a change in office!! No doubt further research is required. It is strange though that this should take 180 years before being discovered. It makes me wonder what else is out there??? 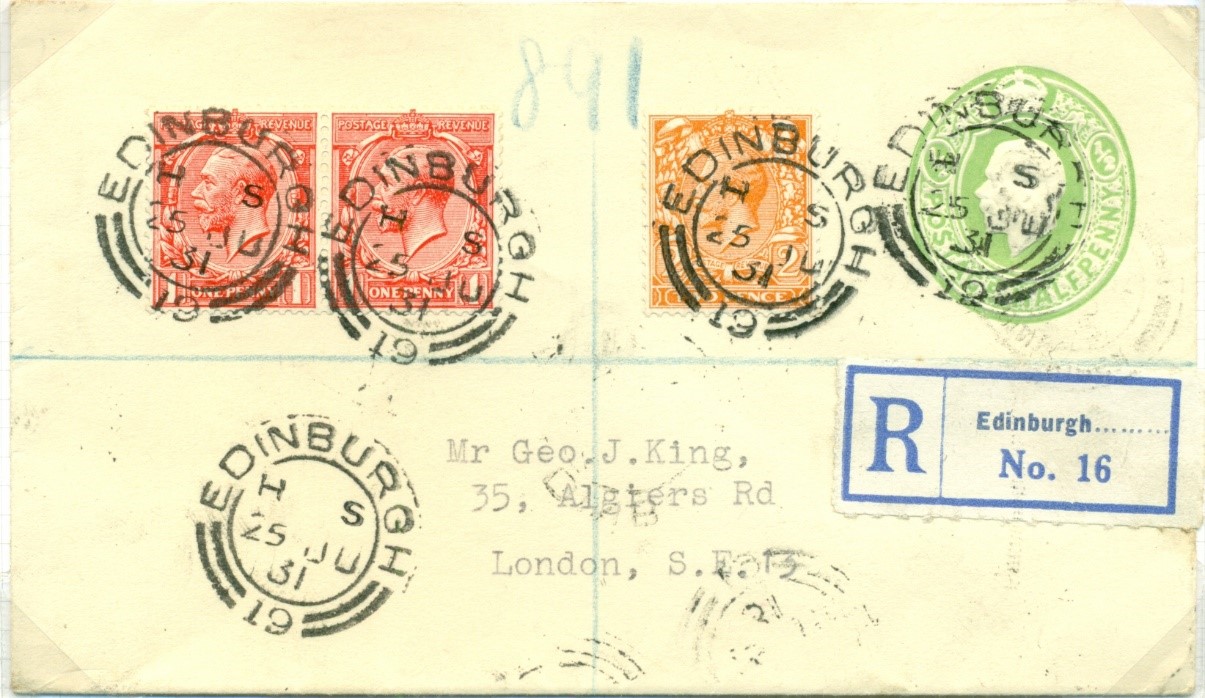 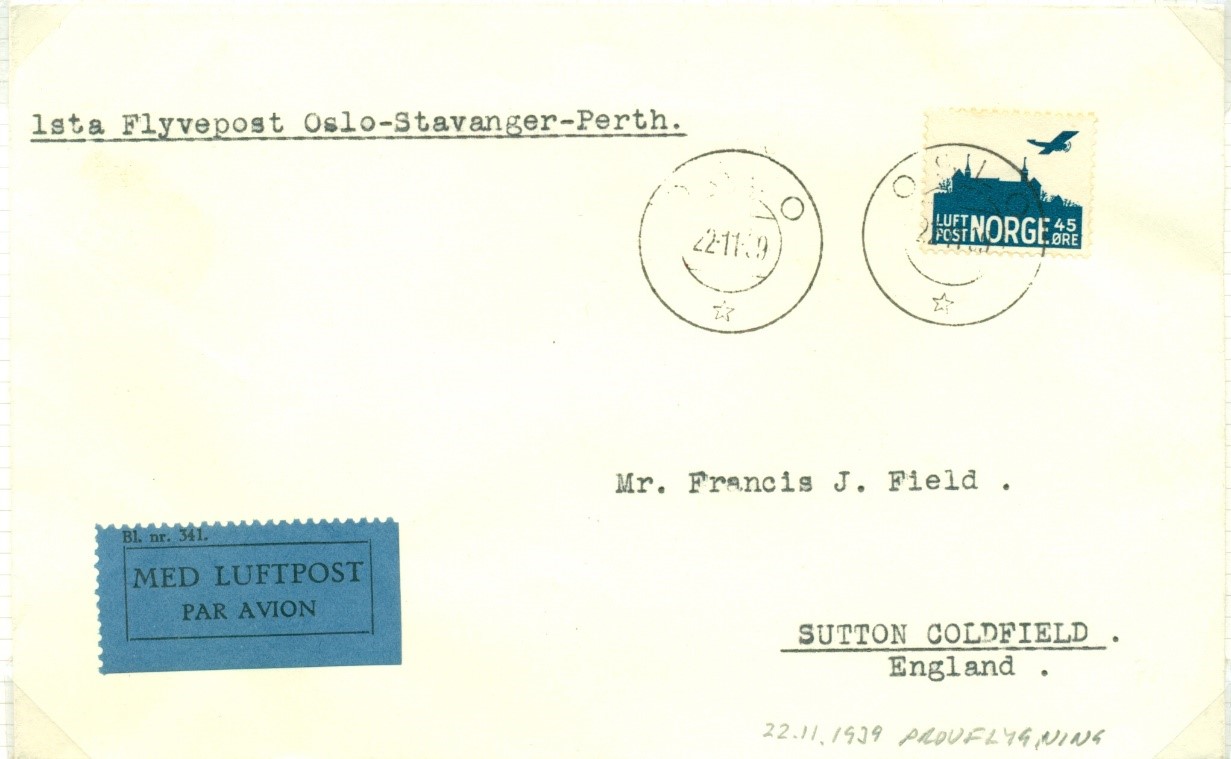