This year Willie King has been invited to give the Tom Reilly Display. Willie has heard the stories and sadly had just begun to get involved in Scottish philately at the time of Tom’s too early departure.

Willie was a collector from about the age of seven and continued to dabble in GB issues until working in Saudi Arabia where he became more active in philately and became president of the Arabian Philatelic Association before returning home in 2000. Before then Willie had also become a member of the Ceylon Study Circle, the Scottish Postal History Society (President 2008-10) and a Fellow of RPSL. Having visited SW Congress he joined both Largs & Ayrshire clubs and later became president of both. Later he joined the Caledonian and Alba societies and occasionally attends the Prestwick Stamp Club. He was president of ASPS in 2008.

The Changing Face of Philately

There are two displays included in the 2015 Tom Reilly Display. One displays mail passing through post offices, which are situated in the River Spey valley and a second display is based on the Philby correspondence showing mainly letters going to and from the Middle East.

A number of items are highlighted from each display showing how philately has been changing over the last 40 or 50 years and suggesting future trends. Philately displays have long been divided into several groupings – the competitive display, the displays given to general societies and those where the attendees may not even be collectors.

The ‘traditional’ display and learned articles based on a single stamp or short series of stamps are now the provinces of the specialist societies. The ‘fly-specker’ of old who perused examples of penny blacks in order to determine which of the 12 plates a specimen belongs still exists – and his job is much easier now than 50 years ago. On the next page please note a 1d Black on cover – from Garmouth near the mouth of the River Spey. However it is now just a few minutes task to scan the cover or the stamp and magnify the key features as shown so the stamp can be plated – in this case as plate 1a- a rather common 1d black plate!

All this is possible because books are available written by the old specialists and we now have the technology to use a scanner to scan the cover or stamp, straighten it up and remove extraneous colour such as the red cancel, compare the position of the lettering and the ‘rays’ in the top corners to identify many more details about the stamp.

Now for the postal historian: Of interest are - the Garmouth Penny Post cancel on the top left and - on the back of the letter a ‘Fochabers’ single line cancel which extends the actual usage period currently recorded by Auckland/Stables from August 1839 to September 1840. 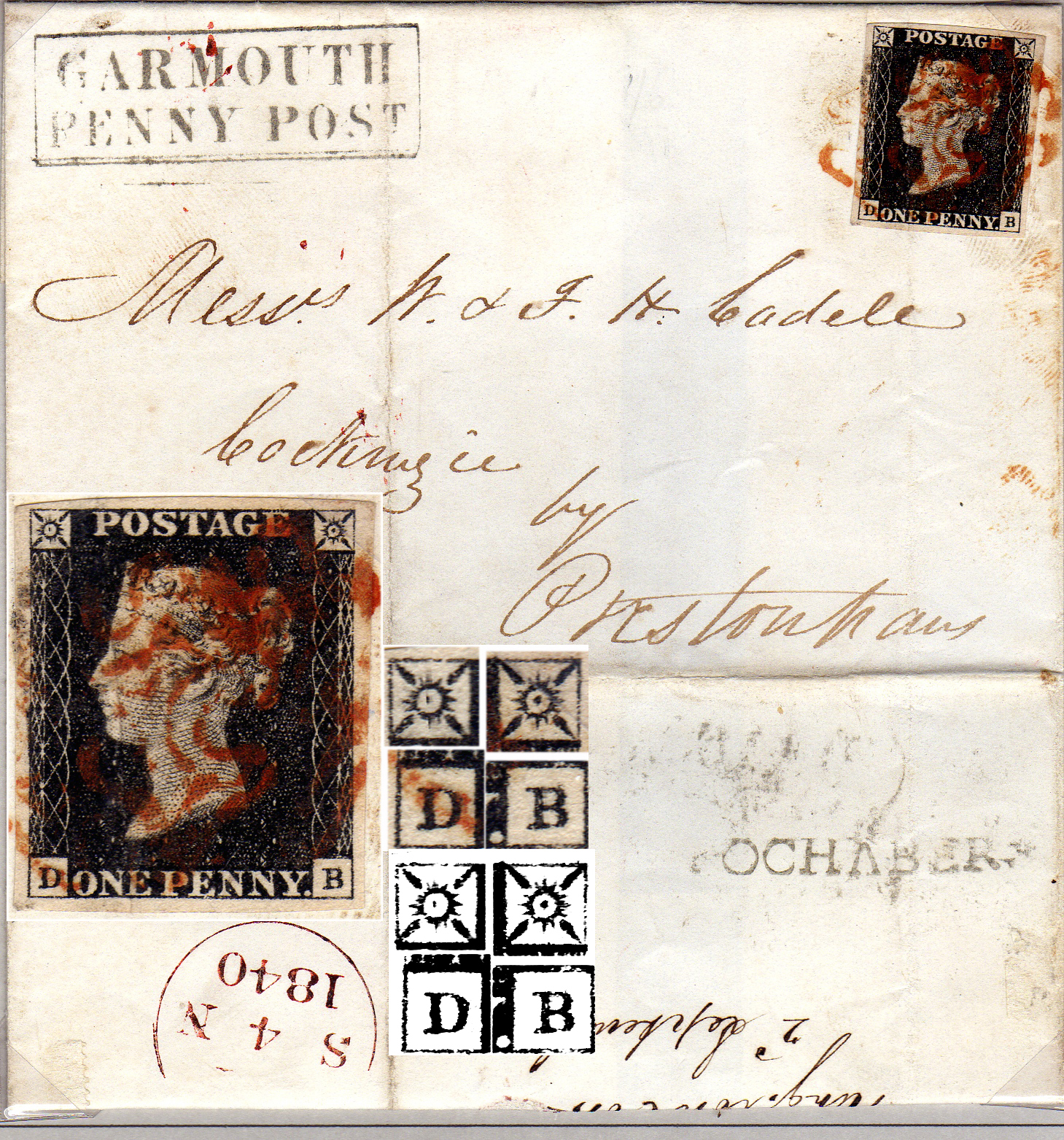 Therefore due to the publication and relatively easy availability of identification information it is much easier for the current collector to identify and demonstrate that the item on display has a particular ‘pedigree’ or special interest.

Another major aid to the collector in the 21st century is the access to on-line sales and high quality images on both auction and stamp dealer sites and also sites organized by both specialized and local societies. Some societies do restrict the access to society members but usually have considerable amount of information freely available to the casual browser.

Regardless the simple act of raising a question on google can solve many queries e.g. on which day of the week was the item posted and what was the postal rate at that time. The Great Britain Philatelic Society site currently provides free access to rates information and is to be commended. It is also surprising how much information can be gained by searching the name of the sender or receiver of a letter.

Many traditional collectors collect by a specific country and thematic collectors initially introduced collecting by theme instead of by country but like traditional collectors have specific rules when displaying competitively. In the early 19th century a collecting interest was collecting in signatures of prominent people – easily sourced because many had parliamentary privileges, which allowed the huge concession of free postage! – since they signed and dated the face of the cover. This interest declined when the privilege was removed in 1840 but has been revived in modern specialist cover collecting as well as collecting signatures of celebrities.

In the early 20th century postcards became a major collecting interest with many actually passing through the post. These have become the modern equivalent of the pre-envelope early letters where you can have interesting information from opinions, important news of events in history – or just gossip. This additional ‘information’ concerning events at the time the letter was sent or a stamp used are, in my opinion, an integral part of the enjoyment of the hobby and in particular to an audience who are unconcerned with philatelic details. Speybay is a village on the across the river from Garmouth and a 1916 postcard which includes the comment “we had 96 wounded Tommies for afternoon tea”. This just dropped in after general chitchat.

Open philately goes under various guises but generally there is an acceptance of ephemera and related material, which enhances the core subject. Roy Erskine’s display on the inward mail to “Wilson’s of Bannockburn” is a prime example of a display which has interest for the specialist postal historian, to the general collector but also to those who have little interest in our strange habit of collecting old bits of paper. Wilsons were the firm who supplied tartan to the British army and to Scottish stores so have an incredible range of incoming mail from both international and national sources.

The second display follows the personal history of Harry St.John Philby illustrated with letters to his mother and wife and also mail to him between 1911 and 1950. Covers are to and from the Middle East before and after the discovery of oil. This addresses the influence of Philby on the politics of the area and the other interactions he had with personalities of the period from T.E.Lawrence, Winston Churchill and even Montgomery of Alamein who just happens to have been his best man when he was married. 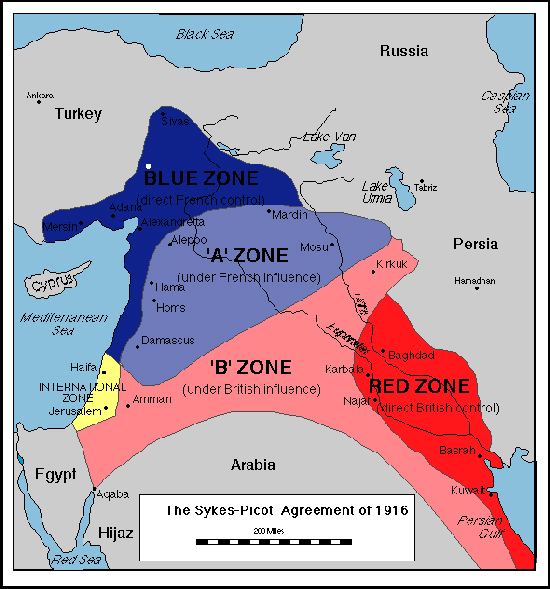 Some collectors ignore entirely the actual written contents in letters or in postcards and concentrate exclusively on philatelic matters. This may be purist but it misses so much that goes in parallel to our hobby. In my personal opinion there are two main keys for the development of modern Philately and these are to some extent related.

Firstly the collector must go beyond the stamps and the purely philatelic markings on covers. Identify the recipient and where possible the sender and where available look at the content of the message. In the vast majority of items there will be nothing of interest but when something appears to be interesting – go to the second step and ask your computer – it takes a few seconds. Then, just occasionally, it will lead you on a quest to find out more of what was happening at the time the letter was sent related to that location and/or that person and provides a much more interesting background to the stamp, letter or postcard.

Above all remember that

Philately should be Fun