Ray comments, 'It is a great honour to be asked to give this display. Sadly, I never had the privilege of meeting Tom Rielly although I have heard many stories about his personality and contributions to philately from fellow collectors.'

Ray moved to Glasgow from the south of England in 1975 to take up a lectureship in Computing Science at Glasgow. He was President of the Caledonian PS in 1982-83 and 2014-15, and President of the Glasgow PS in 2015-16. He is the Public Relations Officer of the Netherlands Philatelic Circle and a member of the Germany and Colonies Philatelic Circle and the Civil Censorship Study Group.

My philatelic journey started when I was about eight or nine and my grandfather gave me a Strand stamp album with one page per country and a lot of his duplicates to put in it. A few years later I moved on to collecting Netherlands stamps because I had visited the country and was interested in its history and culture; I also liked the stamps (at that time!) I became a junior member of the Clacton Philatelic Society where I received a lot of encouragement and good advice. I also dabbled in thematic collecting at this time. I chose military history as a theme, covering the Napoleonic Wars and the South American Wars of Independence.

I became very interested in postal history and realised that I could link this to my general interest in military history. I considered various possible options but I eventually settled on the First World War as my focus because there was a lot of material available at reasonable prices at that time. Both my grandfathers had fought in the war and survived, which gave me another reason for choosing this area.

The Display consists of sheets selected from my World War 1 collection of postal history and postcards. There is no grand plan for the collection, I collect what interests me and I hope other people find something of interest. Every now and then, I have picked up an unusual cover or postcard and that has started me looking for other similar items and evidence of this will be found in my display.

The material is in four major sections: Military Mail, Censorship, Prisoners of War and Postcards (on the themes of Propaganda and Military Humour).

Military Mail (2 frames). I have deliberately avoided a display showing details of different field post offices systems. I have tried to find some areas which are perhaps more unusual. The first frame covers various aspects of military mail, starting with the first few weeks of mail from the BEF in August 1914 when postage was supposed to be paid. This is followed by a selection of covers from different countries and campaigns. The second frame covers a side line that I started on – military mail that was sent to unusual destinations. The assumption was that mail from the front line would be going to family or other people in the sender’s home country. However, some mail was sent to other destinations and, although there were rules covering this use through different field post office systems, these were not always followed.

Prisoners of War (3 frames). The first frame includes variety of items of mail from POWs in German camps. This was one of the starting points for my WW1 collection. A number of the covers shown were sent to the Moscow Aid Committee for Prisoners of War. These were covering envelopes that contained correspondence addressed to Russia; the contents were forwarded and the envelopes retained by the Danish Red Cross. All of these envelopes that I have seen contained correspondence from Russian officers, presumably because ordinary Russian soldiers were illiterate.

This is followed by a frame containing material from another idea that I decided to try – looking for mail to POWs. I thought this would be difficult to find but these are some of the better items I have managed to find. The International Committee of the Red Cross (ICRC) website in Geneva has been a fantastic resource for me; they created 5 million handwritten and printed records relating to British, French and German POWs during WW1. These have now been digitised and are freely available to search for research purposes. An example of mail to a POW is shown below. This left Devizes on 30 June 1915 addressed to Lt. Col. Collingwood RAMC, a POW in a sub-camp of Cassell. The circular UK P.C. (Passed Censor) cachet confirms that this is post free POW mail. There is circular cachet of the Cassel POW camp top left, partially obscured by a label and a boxed cachet “Not in Prison Camp Cassel” bottom left. The small label with the green border states “Departed / No forwarding address” in German and French and a manuscript Zurück nach (Return to) London has been added at the top. There is a British cachet on the back of the envelope “Place of Detention / Not Traced” and it has been returned to the sender. The ICRC records show that Lt. Col. Collingwood was repatriated on 1 July 1915 - the day after this letter was posted.

An example of a letter to a POW in cassel Camp, Germany returned to sender

The third frame covers mail about the support and administration of POWs, including formal notifications about prisoners’ status, requests for information and mail from voluntary organisations that provided food parcels and other comforts for POWs.

Postcards (2 frames). The last two frames reflect the biggest change I have seen in philately since I started collecting. When I joined the Caledonian PS in 1975 I don’t think anybody would have dared to show a display of postcards! Collecting postcards was something different (“Deltiology”) although perhaps a few postcards could be used in thematic collections. Now, I find that many philatelists collect postcards and the National Exhibition includes a competitive class for postcards. The First World War occurred during the ‘Golden Age’ of postcards and millions were produced on various topics related to the war. I have chosen two subjects to illustrate with contemporary postcards: Propaganda and Military Humour. The first part on Propaganda is about Kaiser Wilhelm II; with his characteristic moustache and his desires to be seen as a great military leader (like Napoleon!); he was an easy target for caricatures and cartoons. The second part is rather odd piece of propaganda; this is a set of six attractive postcards showing interpretations of Aesop’s Fables related to events in WW1.

The frame on Military Humour starts with cards from my favourite cartoonist, Bruce Bairnsfather, who served on the Western Front and drew cartoons about life on the front line. One of his most famous cartoons is “a better ‘ole”, shown below left; it was used in the title of a book about Bairnsfather’s work by Tonie and Valmai Holt (In Search of the Better ‘Ole, Pen and Sword Books 2001).

There were also cartoonists on the other side who did similar work depicting their views of the war. Examples of cartoons by two of them: Karl Pommerhanz, a Bavarian, and Rud Kristin, an Austrian, are included in the second part of this frame. A typical cartoon by Karl Pommerhanz is shown above right. The title at the top right is “Fortunate in the Field” and the caption is “(curse) What if my belly had been on the other side!”.

One of the problems with the approach to building my WW1 collection is that I have material from many countries and so there is a danger that I have become a “Jack of all trades and master of none”! However, I have received valuable input from experts in many areas when I have given displays in the past. So, if you find mistakes in this display or can add to my knowledge I would be pleased to hear from you. Of course, if you just want to talk about some aspect of the display I am always happy to do so. 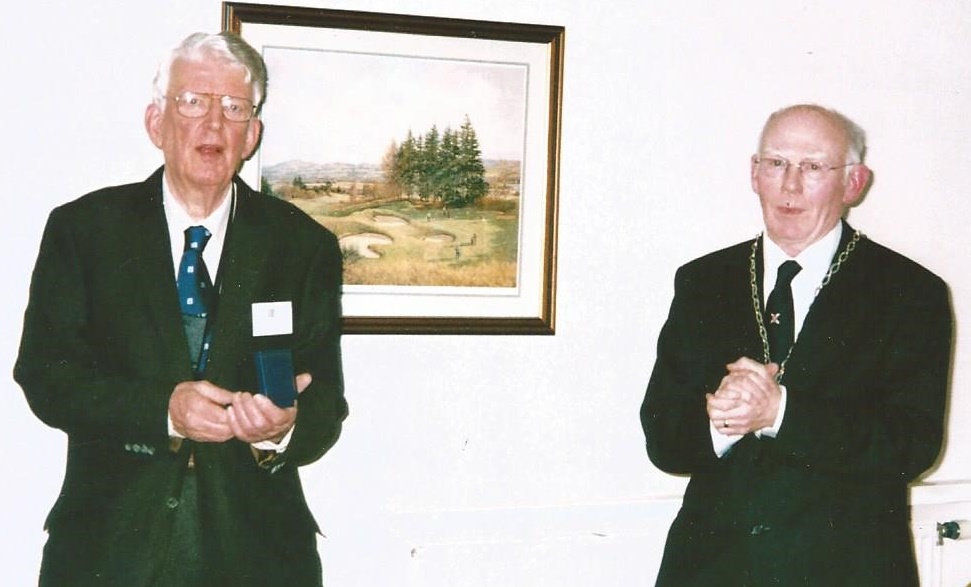