The 87th Congress held by the Association of Scottish Philatelic Societies was held in Perth during the 15th and 16th April where Caledonian Philatelic Society played host for the two days, and Paul McGowan presided as President.

As hosts for the event Caledonian Philatelic Society, who are celebrating their 110th Birthday, produced a Cover and a Postcard to mark the event.

In agreement with Royal Mail a congress cancellation was produced and this is shown above.

Royal Mail yet again supplied two of their Post & Go machines, kiosks A011 and A012, for the event and a Congress overprint was available from both machines.
'87th Scottish
Congress 2016'

Jersey Philatelic Bureau once again attended the event and supplied one of their Post & Go machines, JE01, for the event.
Jersey also produced the overprint on both their Jersey Flag and Jersey Crest Collectors Strips.

The National Museums of Scotland were invited to display high quality photocopies of selected sheets from both the Hotson Collection and the Dunbar-Dunbar Collection.

On Friday night the Tom Rielly display was given by Ray Welland from the Caledonian P.S.
Details of the display can be found in the Tom Rielly section of the website or by clicking here.

Following the Tom Rielly display a civic reception hosted by Lady Provost Liz Grant was held in the Dewars Centre which was very well attended.

Following the civic reception the Congress Dinner was held which was then followed by the award ceremony where the guest of honour was Professor Edward Cowan who is the Professor of Scottish History and Literature at Glasgow University. The National Exhibition competition winners were awarded their trophies and this was followed by the awards of Association honours for services to philately.
The trophy winners can be viewed on the palmares pages of the website.

Signatory to the Book of Scottish Philatelists:

Dr. A D Kindley was invited to sign the Book of Scottish Philatelists in recognition of many years of service to the postal history of Scandinavia, Scotland and Afghanistan, published in the form of displays at exhibitions and more permanently as a large number of articles in a range of journals over a period of some forty years.

There were two recipients of an ASPS Award of Merit this year.
Raymond Baldock from Lanarkshire P.S. and Finlay Mitchell from Largs & District Stamp Club.

At the AGM held on Saturday 16h April delegates elected Alan Wishart from Lanarkshire P.S. to be President of ASPS and Richard Cuthbertson from Scottish P.S. as the new Vice President.
Below is a picture of outgoing President Paul McGowan handing over the chain of office to Alan Wishart. 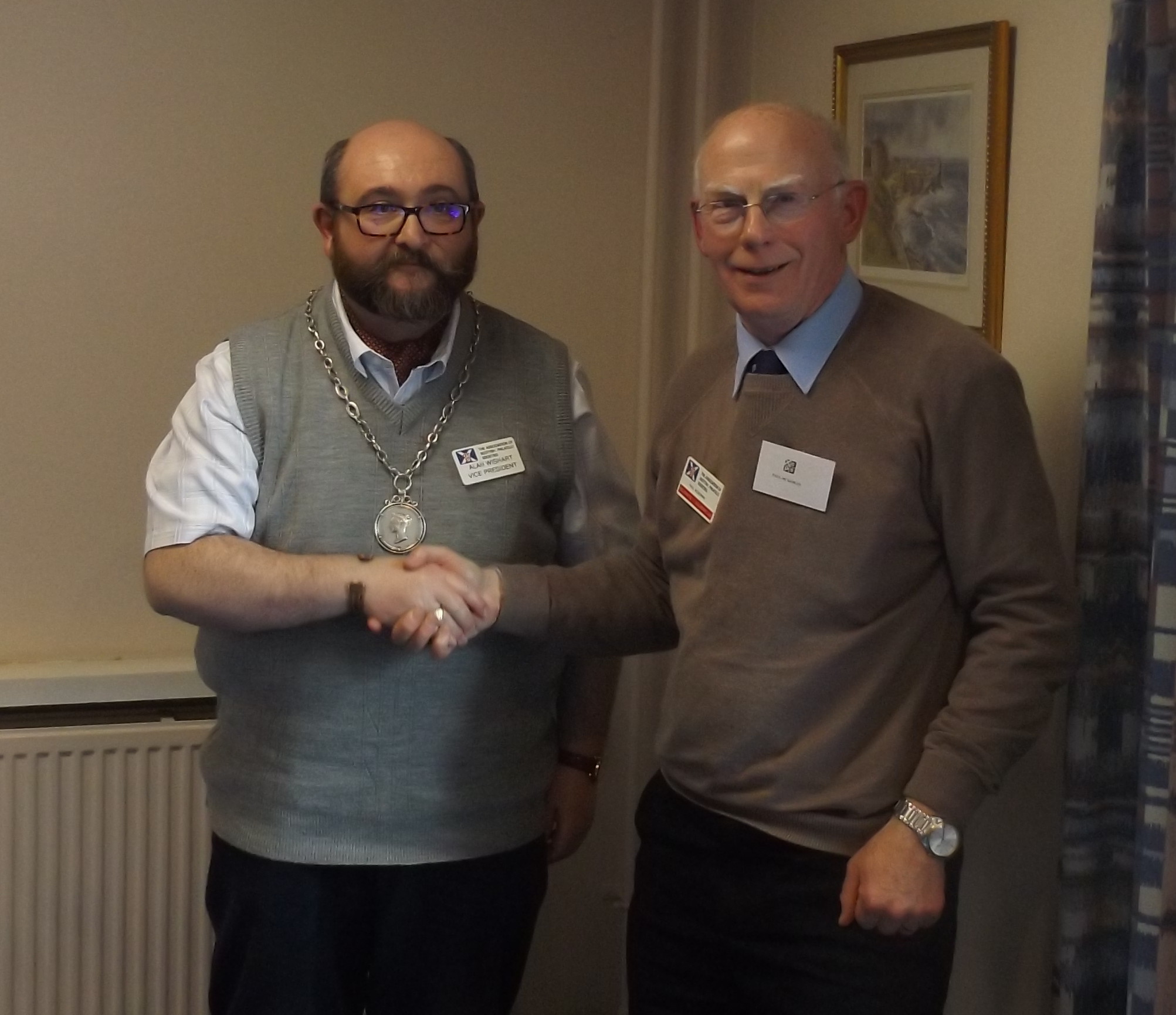