The 86th Congress held by the Association of Scottish Philatelic Societies was held in Perth during the 17th and 18th April where Falkirk & District Philatelic Society played host for the two days, and Jean Osborne presided as President.

As hosts for the event Falkirk & District Philatelic Society, who are celebrating their 50th Birthday, produced a Cover and a Postcard to mark the event.

In agreement with Royal Mail a congress cancellation was produced and this is shown above.

Royal Mail yet again supplied two of their Post & Go machines, kiosks A006 and A008, for the event and a Congress overprint was available from both machines.
'86th Scottish
Congress 2015'

Jersey Philatelic Bureau also attended the event for the second time and supplied one of their Post & Go machines, JE01, for the event.
Jersey also produced the overprint on both their Jersey Flag but not on their Protected Species Collectors Strips.

As part of the Congress Douglas N Muir, Senior Curator, Philately from the British Postal Museum & Archive was invited to provide a display.

On Friday night the Tom Rielly display was given by Willie King from Largs & District Stamp & Postcard Club.
Details of the display can be found in the Tom Rielly section of the website or by clicking here.

Following the Tom Rielly display a civic reception hosted by Lady Provost Liz Grant was held in the Dewars Centre which was very well attended.

Following the civic reception the Congress Dinner was held which was then followed by the award ceremony where the guest of honour was Dr. Tony Pollard. The National Exhibition competition winners were awarded their trophies and this was followed by the awards of Association honours for services to philately.
The trophy winners can be viewed on the palmares pages of the website.

Signatory to the Book of Scottish Philatelists:

Dr. Stewart Gardiner FRPSL has been invited to sign the Book in recognition of his bibliographical work and in particular, his contribution to the advancement of Cinderella philately as designer, producer, publisher and co-compiler of "A General Illustrated Catalogue of Exhibition and Event Poster Stamps to 1914".

At the AGM held on Saturday 18th April delegates elected Paul McGowan from Caledonian P.S. to be President of ASPS and Alan Wishart from Lanarkshire P.S. as the new Vice President.
Below is a picture of outgoing President Jean Osborne handing over the chain of office to Paul McGowan. 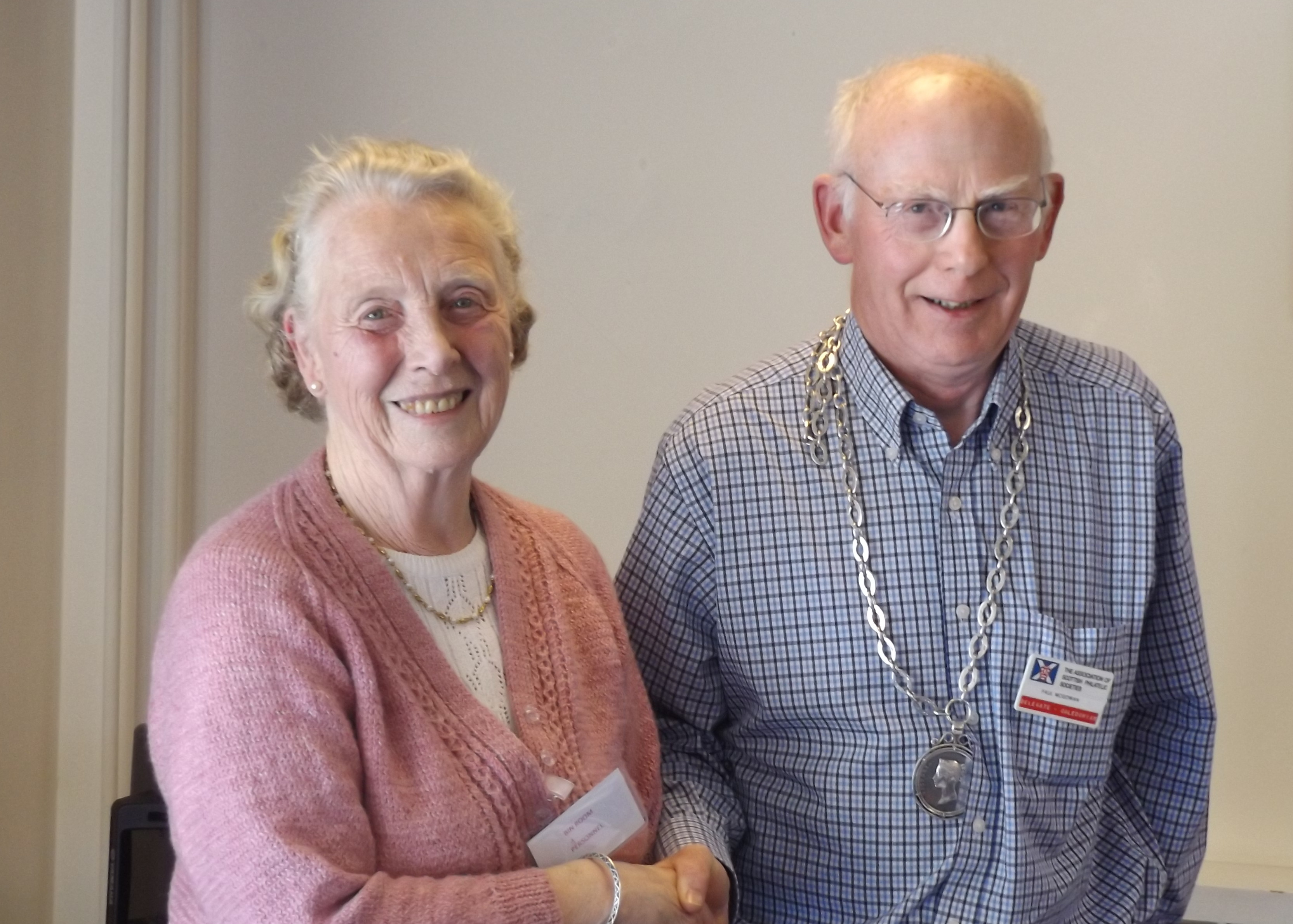